FAQs: What is HSP and Empath? 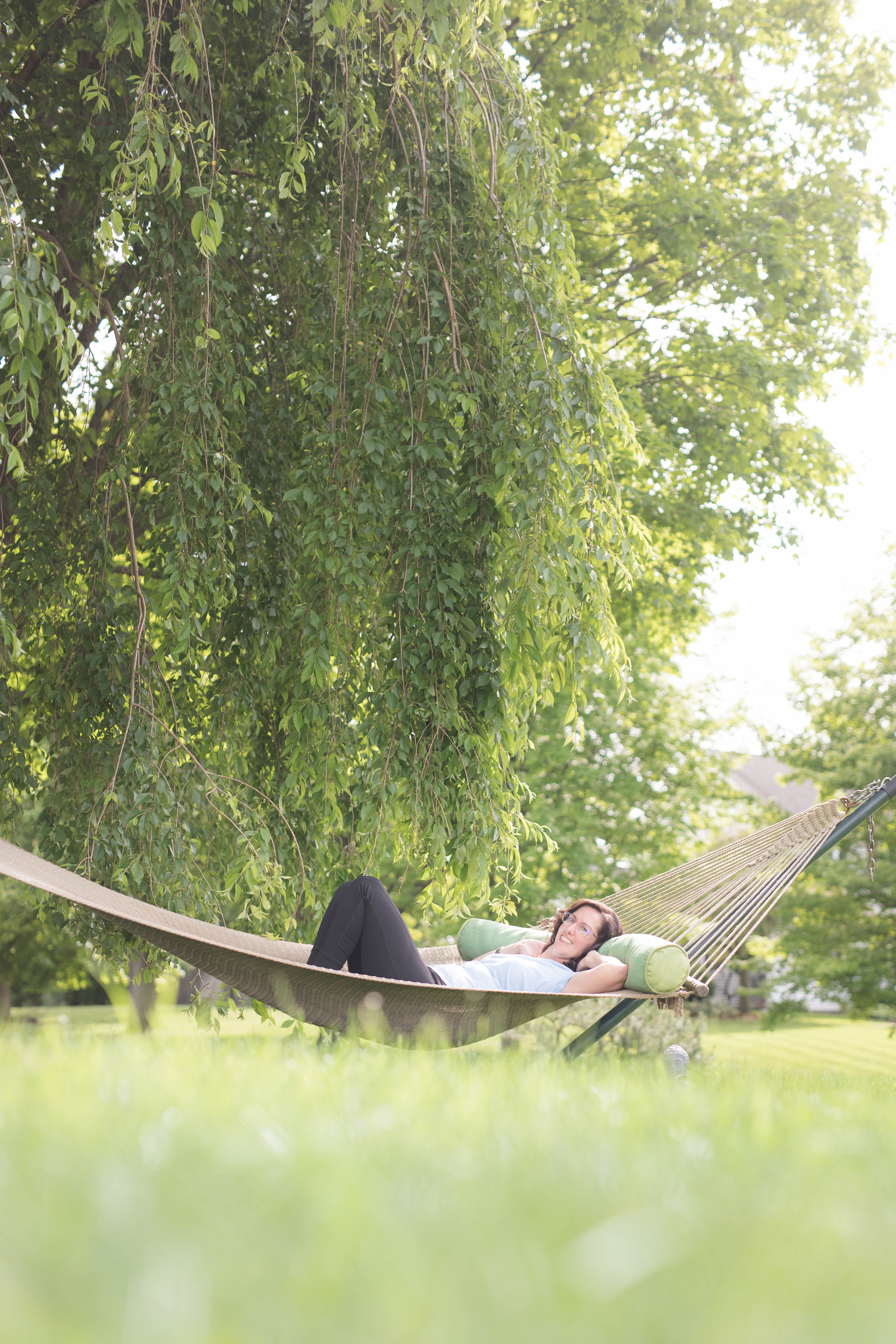 Many people who are highly sensitive and empaths love the outdoors. Not only do we love it, but we also need it to balance our nervous systems from everyday stress.

Above is me in my favorite spot, under the willow tree, soaking up the sun. If you don't already, I invite you to get outside for some stress relief daily.

Below are a bunch of facts about HSP and Empath traits in case you aren't familiar with them. If you want to get through all of the patterns and emotions that are keeping you stuck reach out for one on one coaching.

You won't regret it. I often hear this is the best thing I have done for myself. I'm so glad I found you. I believe it's because I'm intuitive, I'm an empath and HSP too, and I have tons of experience transforming lives.

Illuminating your true self and gifts is one of the outcomes making life easier!

Wondering Do I Have a Highly Sensitive Child?

Could My Child or I Be an Empath?

Then your intuition led you to exactly the right place!

What is wrong with me or my child? We are overwhelmed “easily”, shy and overstimulated by too many people. Read on for some answers.

You struggle with not fitting in with other parents. You just can’t keep up with the pace. Sporting events, PTA, school schedules, work and socializing is too overwhelming. You wonder how come other parents seem to have it together and I don’t? Why don’t they need so much down time?

You love your children, yet the noise they make when playing grates on your nerves and overwhelms you. You feel you see things differently, feel things deeper and are more intuitive than others.

Not fitting in easily?

Your children are picky, shy and overstimulated by birthday parties or sporting events. Fireworks freak them out. They seem to feel things deeper than other children. After school your teenager needs a nap to recharge from the overstimulation of school and thinking all day.

And all this is just so overwhelming and frustrating for you.

One of my passions is to help overwhelmed sensitive children, teens, and adults/parents transform their lives, going from overwhelmed to calm. There are ways to soothe your nervous system. You can feel healthier and more relaxed.

If Someone had taught you, as a child, skills to deal with these traits, life would have been different, right?

Wondering what skills I’m talking about see the Parent Coaching, click on this page. Stacey works with parents and their children. She is skilled at both having a background in counseling and working with families for twenty years. To get started click the button and fill out the form, you will get a response within 48 hours.

Let’s get into more information about Highly Sensitive and Empath traits…..

What are the signs and symptoms of HSP?

Highly Sensitive People are very affected by the environment around them. Your nervous system is on overdrive. This can manifest in many noticeable ways that I will discuss below.

My child seems hyper-sensitive and it’s hard for them to focus on more than one thing at a time, could they be HSP?

HSP can often be confused with other conditions like A.D.D and Autism in kids, and even A.D.H.D. in adults. The reason is, a lot of the personality traits can mirror the same behavior in these other conditions, but there are a few major differences. HSP children generally do well in school and their cognitive abilities may not be impaired at all. HSP kids may appear to be overly sensitive to things like the folds in their clothes, similar to a child with autism, but they have less trouble interacting with other kids and interpreting nonverbal cues. In fact, HSP kids excel at communication and interpersonal skills.

Highly Sensitive People (HSP) make up 20-30% of the population. This means there is a good chance that almost a quarter of the people you know, including you, have highly sensitive personality traits. HSP men are just as common as HSP women. 20% of men and women are born with the HSP trait.

Is HSP a psychological diagnosis or disorder? What is the treatment for HSP?

HSP is NOT a psychological diagnosis or a disorder. It is a term coined by Dr. Elaine Aron, a renowned psychologist who studied highly sensitive people and their sensory sensitivity in depth. She shared how understanding the symptoms of HSP and using positive coping skills can turn those once frustrating and misunderstood behaviors into a child or adult’s biggest strengths.

Is HSP caused by trauma?

HSP is NOT caused by trauma, but HSPs are more impacted by trauma because they experience everything deeply. HSP is actually an evolutionary trait, found in over 100 species. Studies show those with HSP have more “mirror neurons,” and other chemical differences in their brains, that allow them to process more thoroughly. This is not just a term for people who are sensitive, it’s actually science.

What is the difference between Highly Sensitive People and Empaths?

Empaths have many of the traits of HSP, but they take it a step further and actually absorb the energy around them. See more in this section: HSP vs. Empath. Empaths are more attuned to subtle energy, which affects them very deeply. They may feel another’s pain physically themselves, or take on the moods of those around them without even knowing they are doing it. Like HSPs, they are very connected to nature, but may have deeper, more intuitive experiences.

Think you may have a HSP Child?

Signs You May Have a Highly Sensitive Child:

HSPs are constantly inundated by the energy of everything and everyone around them. This can cause them to feel overwhelmed and misunderstood.

Imagine the floodgates being open to everyone else’s feelings, picking up on every non-verbal cue, and being highly affected by your surroundings, all at the same time! That may be why your highly sensitive child is coming home to take a nap — to get a much-needed energy break. This is actually a healthy coping skill for an HSP child, but may cause you to worry they are isolating. Don’t worry, they are just taking a much-needed break from the stimulus overload they experience all day.

If your child has ever been called:

“Too Picky” “Too Difficult” “Overly Sensitive” “Too Emotional”

You May have a Highly Sensitive Child

And this is not a bad thing, if properly attended to. HSP children have many strengths that can be leveraged with proper coping techniques and a focus on self care. They have vivid imaginations, for one, and they can channel that into many creative endeavors.

Once you know that you have a HSP child, I can teach you how to help them cope. This is where my Awareness Coaching comes in. I help you learn if your child is a HSP, an empath, or not, and get help either way to make both of your lives easier. If they turn out not to be HSP, I will refer you to the most appropriate provider to address your child’s behavior. But, if you landed on this page, it is highly likely you and/or your child is a highly sensitive person.

Do any of these HSP Adult Personality traits sound like you?

Ever had to take a weekend off from people after a long week of constant interaction at the office? Get headaches from constantly taking on other people’s stress and emotional problems, without even knowing you are doing it? Maybe you have noticed that you have always felt everything deeply. This could include the energy in a room and other people’s moods. Your innate sensitivity may have even influenced the job you have, without you knowing it. You are likely extremely intuitive and may describe yourself as a “good judge of character.”

Artists, therapists, nurses and healers are all careers that HSP and Empath adults may find themselves in. And often HSP adults are leaders and achievers in their fields.

Remember that science lesson in school about cell structure? There were cells with “permeable membranes,” and cells with “semi-permeable” membranes. Think of HSPs as “semi-permeable.” In other words, they let some information in, and are more aware than non-HSPs, but they aren’t actually embodying all of that outside energy and taking it in. On the other hand, If you or your child are an empath, it is more like a “permeable membrane.” You are susceptible to all of the energy you are surrounded by all the time. From your environment, to other people, to nature. You have to work much harder to protect your energy from that of others because you are so easily affected by it. Rock solid boundaries must be established to block negativity and toxic vibes if you are an empath.

If you have ever felt drained after leaving a room where two people were arguing, or physically sick and depressed after visiting someone ill in the hospital, you could be an empath. In my new e-book, which you can download for free below, I teach you how to protect yourself while still retaining your amazingly intuitive qualities.

Learning self-care to cope with your sensitivities is not only important,

it’s vital to preserving your energy and health.

Being sensitive or empathic, doesn’t mean you’re weak, just the opposite!

If channeled effectively, your innate sensitivity can be your biggest superpower!

And I will show you how.

By using a strength-based approach, you and/or your child will feel validated, and you will feel relieved.

Learn easy, energy-saving techniques by signing up for my

How to Cope with Life as a HSP or Empath,

for Parents and Children”. If you do not receive it, reach out to team@awarenesscoachingllc.com.

You will get emails periodically with information as well.

If you need more individualized help, book me for:

Learn healthy coping skills and take the overwhelm out of your life starting today!